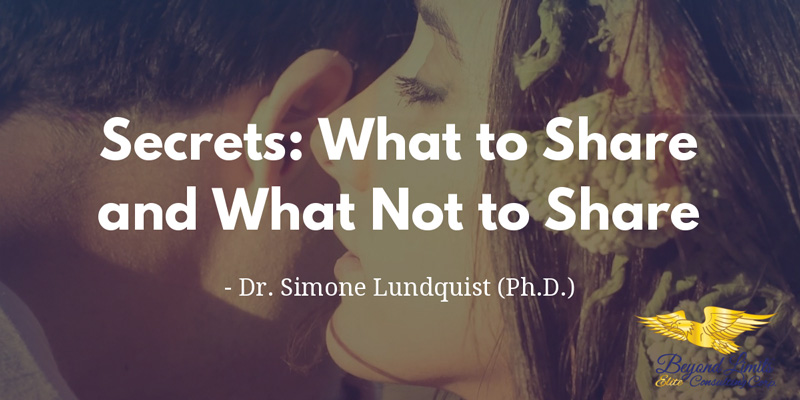 Let me be very clear here. Sooner or later, secrets will definitely destroy your romantic relationship and will also hurt both your and your partner’s feelings in deep and sometimes unamendable ways. To determine if a secret is destructive or not, you can ask yourself what would happen if your partner finds out about it. Is she/he going to leave you? Will that be a deal breaker? If the answer is “yes,” then with keeping that secret, you are actually taking away your partner’s right to make decisions based on facts, as they would have access only to half-truths that you have provided, or no idea what the truth of the matter is.

Out of curiosity, I have tried to find out about the nature of this habit of “keeping secrets.” I have found it interesting to ask the secretive individuals to reverse the situation and think how they might feel and react to discovering the same hidden secrets in their partner’s life. At this point, almost all of them tell me they wouldn’t tolerate such deception and end the relationship! What amazes me is that even after that cognition, they continue to keep that secret from their partner and justify their action by saying that if they disclosed the secret, their partner would leave them!

Yes, they might be right! Their partner might attempt to end the relationship! However, there are many effective ways of solving that problem so they can continue their partnership, only this time, with honesty and transparency which will promote trust on both sides and long-lasting happiness for everyone.

The situation often gets worse when the secretive individuals continue to keep secrets, as they will have to lie again and again and continue to engage in secrecy every time there is the threat of the secret being exposed! First of all, living under the pressure of facing that threat can be a quite overwhelming experience which is going to negatively impact their mindset and emotional state in ways which will, in turn, hurt the relationship they so desperately want to maintain! Secondly, having kept the secret, they will always doubt their partner’s honesty and won’t be able to trust them! And thirdly, they will never know if their partner will ever be able to love them knowing that they are flawed or they have made some mistakes in their lives. You see, they lose anyway! And when their partner expresses unhappiness in the relationship and wants to leave them, they never connect the dots and understand that this distance between them and their partner has been initiated by the “poisonous secret!” So, it’s truly to the advantage of everyone in the relationship not to keep secrets you know would be deal breakers. Admitting to your mistakes and offering your sincere apologies and making up for the damage made will save your partnership in magical ways!

One of the other relationship-killing traps people find themselves in is when they share everything with everyone in their lives. Withholding information that is not necessary for someone to know is one of the crucial keys to happiness. I have witnessed so many relationships destroyed just because one member of the couple was sharing all that his/her mom/dad/sibling/friend has said about their partner with him/her. And then sharing their Partner’s thoughts and reactions back with them. You won’t believe how many relationships I have seen fall apart for this single simple reason. Honesty does not mean you have to share everything. Share what is important within the context of the relationship, but keep to yourself anything that is unnecessary and likely to hurt the person to whom you disclose it. For instance, the harmful things others say about your partner. You might think that by sharing such information with them you are creating an ally for yourself, but in the long run, that sharing will backfire and hurt both you and your partner. I have witnessed many instances in which people who share the unkind or hateful things others say about their partner with them. After a while, they find out that they are trapped in an inescapable spot, right in the middle of the battleground, and that they are the ones who are targeted the most and have to take the harsh words from both sides.

Honesty is beautiful. Let’s be honest with our partners and make our relationships ever-growing and flourishing by refusing to conceal the truth which is significant in our relationships, withholding the hurtful information that is meaningless in the context of our partnership, and communicating clearly and affectionately to find out how we can make up for our mistakes rather than hiding them. Let’s discriminate between what needs to be shared and what not, by asking these simple questions about the information to be disclosed: