Do they see your True Value? 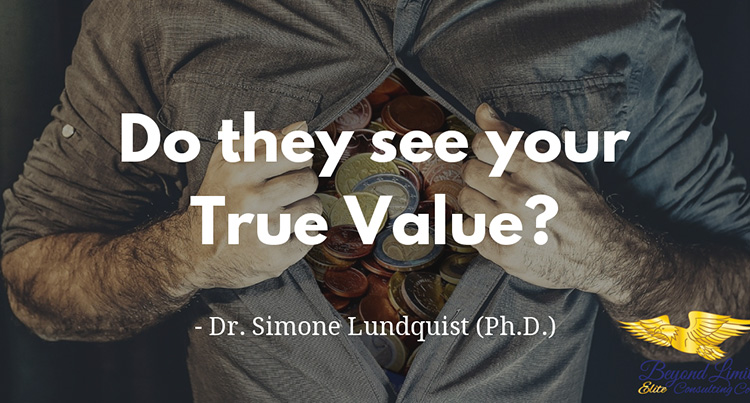 A common complaint I hear from my clients is that their romantic partner doesn’t treat them the way they’d like to be treated. See, the problem is often not in the behaviors, but in the way, they rate and prioritize you in their mind depending on the value they assign to you. It is that evaluation that determines the place you occupy in their life. If they are not treating you the way you expect them to, and if you have communicated that to them with affinity several times, in many different situations, and yet they are not changing their ways, then this is probably not a behavioral problem; it’s that they do not see your value the way you expect them to!

I am going to tell you a story about myself to help clarify what I mean by “seeing your value.” I have an old friend of 11 years, Jay. He is an awesome person who has dared to go for his dreams and has created lots of financial success for himself. He has a kind heart and tries to take care of his friends by giving them a hand in different ways, investing lots of time and effort. We love and respect each other and have witnessed the struggles and challenging situations each of us had to face, during these years. However, when we would decide to get together over lunch or drinks to catch up and spend some quality time together, quite frequently, he used to call or text me an hour or so before meeting and ask to postpone our get-together for a last minute appointment with a client which could lead to a potentially lucrative contract, or something else that had just come up and needed his attention.

This had bothered me for so long, as I am also an extremely busy person, who has put in a request to God for a few extra hours a day, decades ago … When my friends and I want to get together, we schedule a convenient time which works for both of us, at least a week or two ahead of time. To be honest with you, unless something unexpected happens, my friends and I are not in the habit of canceling or postponing outings as both of us know we have collaborated diligently to clear out that time slot to spend it with each other. We value and look forward to that delightful event and prioritize it above our other engagements. I am so lucky to have wonderful friends and family members who treat me like a queen, as I treat them like the kings and queens they are. So such repeated incidents with Jay burdened my heart. Everybody who knows me, knows that I am very outspoken, so I did bring this issue to Jay’s attention several times. Each time, quite annoyed, he told me that I was being too difficult and it was not a big deal between friends to reschedule get-togethers and that he, quite often, treated his other friends the same way, without them complaining about it! Well, I understood that this might not have been an issue for his other friends but it was for me … It was still bothering me and I was still feeling insulted by my good old friend…

And a few years ago, it dawned on me that it was not that he meant to insult me, it was simply a matter of where I stood in his life and mind! He valued me and my friendship, but not enough to prioritize me over other engagements in his life. I had a tenth or eleventh rating on his list which was not what I expected from him and our deep friendship! After that “Aha” moment, I did not feel angry or hurt anymore because I understood that it was useless to try to negotiate a change in his behavior, as long as he did not see “my value” the way I would’ve wanted him to: the rating he had given to me was way below what I expected … So now, whenever he contacts me to get together, I no longer bother to work hard to tweak my schedule and make it happen. I just look at my daily schedule, which is typically full, and let him know that I’m too busy to meet … And now, he asks to get together almost every week, without paying attention to my humble request that we need to schedule it ahead of time … Even though I miss my friend, I feel O.K. about what has happened and how it is going now … We mostly catch up over emails or text messages which is fine … He gets to do all the important things in his life and I get to do the same without feeling annoyed by his accustomed way of scheduling time with me!

Hundreds of times, I have heard from my clients and others that “he just doesn’t listen,” or “if only she would do this or that.” But the truth is, they have rated you way down on their list, below many other priorities in their life! It would do you a lot of good, to realistically find out where you stand in their mind based on how they treat you and make your decision accordingly instead of getting mad or feeling hurt by what they say or do and wasting a life time trying to encourage or goad them to bring about desirable changes in their behaviors … What say you?